This thread has been around for a long time. It was first formulated in 1884 and was standardised in 1903. Mainly found in electrical fittings and accessories, it is slowly being replaced by ISO metric.

Angle of thread = 47. 5 degrees, rounded at top and bottom 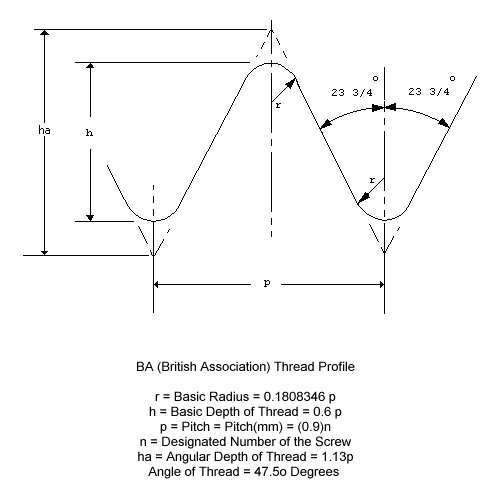 47-1/2 degree thread angle. This is a metric thread system devised by the British for small screws used in components like speedos. Not metric like you might expect, but with diameters determined by a factor proportional to a power of the logarithm to the base 10 of the thread pitch in millimeters.

You'll find lots of BA threads on any British car, but only for fasteners smaller than 1/4". BA fasteners have their own set of spanner sizes. Typically, a set of "Whitworth" sockets will include a OBA (and maybe a 2BA--bigger number = smaller size) socket.