A coarse thread devised and standardised at Manchester in 1841
by British Engineer Sir Joseph Whitworth (1803 - 87). It is used in many types of engineering throughout the world,
although in Britain its use is now being superseded by the ISO metric system. 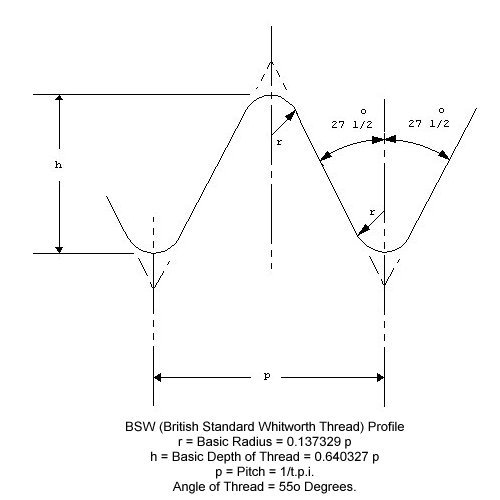 In the 19th Century every British factory which needed to bolt something to something else devised their own fasteners to do it. Clearly, this caused all sorts of compatibility problems. So, along came Mr. Whitworth (I forget his first name right now) who invented a standardized system of coarse threads (with 55-degree thread angle and rounded roots and crests). This standardization was a Good Thing. Along with his threads came heads for the bolts that were based on the length along: the side of one flat, rather than across the flats. Hence, there is no simple fractional number for the length across the flats, which is why your imperial spanners don't fit. The fractional number on your spanners refers to the diameter of the bolt which is 1/4", 3/8" etc. not the distance across the flats (which ends up being various weird dimensions). Some years later the British decided they needed a finer pitch for some applications, so another thread series was introduced (same 55 degree angle). They also decided that the heads were too big for the bolts, so for most applications they switched to using the next size smaller heads. Because of this, and to add one more bit of confusion to life, one manufacturer will mark a particular spanner "3/8BS," while a different manufacturer will mark the same sized spanner "7/16W." They fit the same diameter bolt. The first thing any fledgling British car restorer learns is that his (or her) car has "Whitworth bolts."

They think this is interesting, buy a set of "Whitworth spanners," discover these spanners fit their bolts, and believe they now know everything they need to know about British fasteners. Unfortunately, at this point they know only enough to make themselves dangerous. Instead, what they should have said to themselves is "Oh my God, what other weird and incomprehensible things have they done to the fasteners on my machine?"

The answer to this question is: British Standard Whitworth (BSW) These are the original, 19th Century, coarse-threaded industrial bolts designed to hold locomotives together. Because of their coarse pitch, they are more prone to vibrating loose, so are little used on motorcars. Except for threading into aluminum (e.g. crankcase studs), where a coarse thread is less prone to stripping than a fine one. It turns out that, except for 1/2" (where the British use 12 threads per inch (tpi) and Americans use 13 tpi) the thread pitches for the rest are the same as for American Unified Coarse (UNC). However, the thread form is different; Whitworth = 55 degrees; UNC = 60 degrees. In spite of this, mismatched nuts and bolts mate nicely, so you're likely to find UNC bolts or studs where BSW should have been.